Akron’s tail was again wrenched in a ground handling mishap, and the layup period allowed more of the G-Z water-recovery units to be replaced with Lakehurst’s Mark IVs. Meanwhile, the problem of

how to perform routine maintenance on the stowed airplanes was addressed with the design and building (photo) of a work platform.  (An NASL Engineering drawing shows this was later redrawn to put its support cable around the engine crankshaft, to permit the heavy landing gear to be replaced with a fuel tank).  Also, a simple U-shaped bar was to be slung below main frame 102.5 to provide a fuel-starved airplane a “perch” to park upon while awaiting its turn on the trapeze.

LT Don Mackey worked the math to create a preset navigation system that would allow the planes to venture out of sight- actually beyond the horizon – with assurance they’d return to the airship, itself following a straight, steady course. In November Akron launched two planes heading south of NYC and swept a path 100 miles wide well into the afternoon. Average length of the legs was fifteen to twenty minutes. If prearranged, the entire team could change course without breaking radio silence. When the additional two airplanes could be added, one was to be placed outboard of the first on the side the enemy was expected to be sighted. The fourth airplane would scout directly ahead of the airship. It was reasoned this four-plane sweep was most advantageous just after dawn and at twilight. Of course it would have been possible to also perform a “station” search, where the airship stays in a specific area to be defended, and send out the planes to await the enemy entering the search area.

As darkness fell it was the practice to use navigational flares with the standard drift gauge to maintain course. Eventually the officers would record the Mark III, Model 2 bubble octant was the most reliable sighting instrument when the horizon was indistinct. 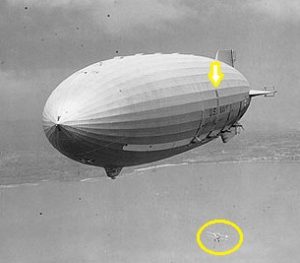 Officers planned for improved radios and perhaps reliable homing gear that would allow a 200-mile wide search pattern, a 60-knot 12-hour daylight sweep covering 165,000 square miles of ocean. Under new skipper Frank McCord, in perhaps the last photo taken of Akron aloft, one of her N2Y-1s (circle) acting as a “running boat,” returns to the airship from the Canal Zone, much as it had before with with a front cockpit full of Florida lobsters. (Arrow- on #6, last of the G-Z condensers is still visible.)

“Ducky” Ward wrote, “Another project that we had going was the spy car. This was a car that was attached by cable to the ship and was lowered by winch down to any given altitude… This car would be lowered [while the airship] was obscured from view by any surface ships. Communication was conducted by telephone from the spy car to the airship, giving the enemy’s position, speed, number of ships, course and speed.” In contrast to the US Army’s “cloud car” deployed from a blimp, Akron’s car, tested with a dummy, proved aerodynamically unstable and was shipped off to an outside facility for study. (Motion pictures of the test, showing the car swinging widely, are in our DVD “The Flying Carriers.”)

LT Harrigan employed a Philadelphia art school student to create what became known as the “Man on the Flying Trapeze” insignia. Adopted by the HTA unit, it was painted on all the F9C-2s and eventually some of the N2Y-1s. Captain E.J. King came aboard and witnessed hook-on operations. (King was to relieve RADM Moffett as Chief of BuAer; later C-in-C, US Fleet, King had not forgotten the unique asset.) The airshipmen’s growing case for the Sparrowhawk’s employment as scouts and desire to appoint LT Mackey as “air operations officer” met opposition from BuAer seniors. The F9c-2 was a fighter, period, and would act only as the dirigible’s defensive screen. They were not be deployed very far from the expensive asset. So there was no need for an “Air Boss” in their view.

More operational experience proved the airplanes could cycle without regard for the airship’s course,  dropping off at any speed as long as they had about 1500 feet to recover. Landings (which came to be called “belly bumps”) could be done with the dirigible as slow as 52 knots, which could be obtained with as few as five of her eight engines operating.  Higher speeds, of course, made

landings easier, with the perfected method being to slip under the airship and add power to latch the hook. Meanwhile, just as every flight was an opportunity to test new ideas, the age old practice of carrying mail aboard was part of many flights. 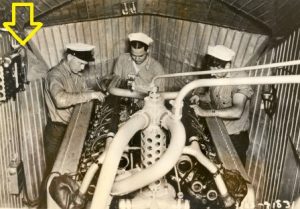 After starting an engine with compressed air, the Machinist’s Mates squirted a little mineral oil mixed with kerosene on the exposed valves every hour as the engines normally ran “ahead,” for which they would also spin the vector wheel for “down” as well. When the annunciator (arrow, detail of panel below) rang up astern/up from the bridge, the operator would cut out the water recovery, ground the magnetos, operate the brake to stop the prop, throw the cam lever over and use compressed air to re-start, then engage the prop and vector as required. The airship’s Maybach VL-II engines were proving quite 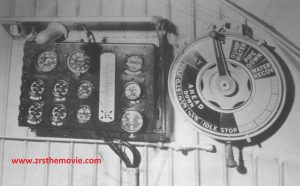 reliable, with top overhauls scheduled between 1200- 1500 hours of operation.  The BG-4-B-2 spark plugs would need reconditioning or replacement every 300-400 hours. Oil consumption, normally about three pounds per hour, was the indicator. Engineman “Pete” Calande told the producer when it got up to about 6 pounds, it was a signal to pull the engine for overhaul. Intake valves usually needed only refacing while exhaust valves usually had to be replaced. Oil was changed every 150 hours and the oil service tanks cleaned.  Enginemen keep a log in each room; shown here is a page from one of Akron’s February 1933 flights.

The fresh-air blower drive train was prone to loosening, but the air compressors

proved to be about bullet-proof. There were compressors in engine rooms 1,2, 5,6 and 7; each room had a storage bottle, and valves to cross-connect the bottles were located below the floor at main frame 102.5. Fuel gauges were not particularly accurate, with physical tank checking being the norm. Fuel pumps were checked as often as the fuel strainers were opened and cleaned. Engine-driven water pumps, beneath the deck plate, could be engaged to drive ballast water forward or aft, a common practice. The floor drain’s tank had to be drained after every flight.

Each engine room also kept a log on its Allison transmission, which needed oiling and greasing at regular intervals. Back in Akron, Ohio, on the previous July 4th, a delegation from Macon, Georgia had celebrated the day with a visit to the Airdock and “their” ship in build. One of the southern Belles in the party posed by the gearhead in this photo.

It was eventually decided the HTA enlisted group would be organized as a separate division with the senior HTA pilot as their division officer.  The center (literally in this photo) was ACMM William C. Cody, leading chief of the HTA unit for both ZRS ships. (Cody granted the producer an interview. Back row second from right is ACM2 D. O. Maconaghie, whose son was a WWII airshipman and helped with details. First row second from right is seaman 1/c William H. Clarke [note “striker” badge], then working in admin but later changed rates to become a Macon rigger. Clarke was at Macon’s rudder wheel at the time of her casualty. Clarke went on to be commissioned in WWII, was of great help to us with historical details, and was the last USN rigid airshipman to pass away.)  Two members of the HTA unit in this fall of 1932 photo are not seen: E.E. Sherman and A.F. Glowacki. Front row: L.A. Alford, F.J. Ferry, W.F. Germain, J.F. Kane, C.E. Jones, H.T. Cudd, Clarke, and V. J. Feigenbutz. Second row (pilots): F. M. Kivette, H. B. Miller, D.W. Harrigan, F. M. Trapnell, H. L. Young and R. W. Larson.  Back row: H. Ross, J. M. Robonic, D. O. Maconaghie, R.E. Kreps, Cody, R.R.Davis, C. Green, K. H. McArdle and H. E. Aemissegger.

Since Los Angeles had been built from plans developed from a commercial passenger ship, its creature comforts were a luxurious contrast to earlier airship’s hammocks and heating soup on an engine manifold plate. Akron was a military ship, so while amenities were understandably geared toward the two-class levels of officers and enlisted, longer missions were certainly tolerable for both. Aft of the generator room was the galley (photo, with the ship’s cook P.S. Hoover checking a ham) utilized a propane-powered stove and oven combo. Note the handy fire extinguisher. A pass-through portal served hot meals to crew in the enlisted mess, seen in this photo.  (L to R: BM1 W. Bishop, Seaman 1/c O.A. Thoen, Coxswain B. H. Smith, BM1 H. Ballard, and BM1 R. Bird.)  Note the sailor’s “Dixie cup” hats stuffed into the girder’s lightening holes. Ever weight-conscious, the plates and bowls were light plastic Beetleware. With one facing as the camera in this shot, behind were the sloping windows, making it possible to enjoy a meal with the view of the ocean below. Down the starboard Bay VII companionway forward was the CPO mess, and then the Officer’s mess, and the junior officer’s bunks. At extreme right is the open door from the athwartship gangplank, where it was

a short walk across the top of the airplane truss to and from the enlisted head and berthing spaces. While there were no showers, both classes of heads featured sinks with hot running water. (Photo: AMM3 P. R. Shauger washes up next to the step-up door leading across to the mess.)

The flushing toilets featured curtains for privacy when answering nature’s call. Not part of the factory contract, the crew had to create smoking rooms for themselves. The enlisted space (photo) was built aft of

their head, below engine #8. Not planned to be habitable, it was said ventilation in the unheated “room” was so poor a light smoker need not have actually lit up to enjoy a smoke break.

Back in Akron for the cold but enthusiastic on March 11th Air Dock festivities, BuAer Chief RADM William A. Moffett spoke of possibly enlarging the ZRS ships and later obtaining larger ships capable of carrying more planes. (President Franklin Roosevelt, who never forgave a court loss to Goodyear in 1924, delivered a very public snub by not sending the First Lady to christen the new airship, as both Herbert Hoover and Calvin Coolidge had done.) Moffett spoke and then stood next to his wife, Jeanette Beverly Moffett, as she christened the new USS Macon.  So while Akron had dazzled the

Miami Air Races crowd with a demonstration of hook-on flying, the officers and men of the USS Akron,  just then getting used to the concept the LTA/HTA should adopt flattop’s tactics to prevent the carrier vessel from being seen by the enemy, would not get the chance to prove the flying carrier concept to senior leadership.

First flight of ZRS-5 was scheduled for the following month, but April was to have another milestone in the history of the rigid airship. Akron was fully capable of flying the Atlantic; a trip to Bermuda, or the Azores, and back an easy reach. Certainly no one could have foreseen her falling to the events of April, 1933.

Read on to The Most Costly Accident in Airship History

Read on to The Hook-On Aircraft