In spite of what TV tells you, Americans did not conclude the rigid airship flying carrier was impractical after USS Macon sank in 1935.  That year, a blue-ribbon panel of distinguished experts (photo here from ‘Air Services’ magazine) executed an airship study SECNAV 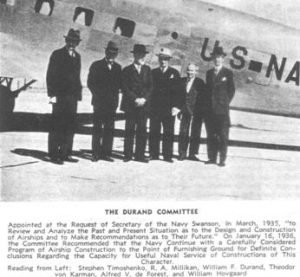 had commissioned.  Their report emphasized that “experience with large airships in the United States has not yet been sufficient to give ground for a wholly settled opinion as to the character and extent of their usefulness, either commercial or naval.” Some fifteen copies of the Durand Committee reports may have been printed. Sadly, they did not align with the Roosevelt administration’s policies at the time.

It might be easy to  dismiss giddy supporters as being blinded by the glow of their own enthusiasm. The more even-handed review of a given weapons system would  include its evaluation by adversaries who would have had to face it as a threat. The National Archives preserves a pre-war Japanese film, in a style similar to a US newsreel, which contains motion pictures of US Navy air power, airships and senior Naval officers serving at the time (shown here, frames

from that film: J-4 play-acting mooring at the Empire State Building’s mooring mast under construction, and RADM Joseph “Billy Goat” Reeves).  The film is very specific about the rigid airship in the Pacific.

This Japanese motion picture reel shows the USS Los Angeles test “landing” on the flattop USS Saratoga, followed by a map showing how rigid airships could patrol the Pacific 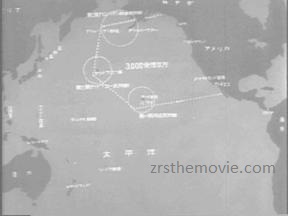 approaches from masts in the Hawaiian, Midway and the Aleutians Islands. A specific frame enlarged at left; it is an amazing parallel to (if not just a translation of) a Goodyear–Zeppelin booklet. The voice-over describes the rigid’s long-range capabilities.

The continued Japanese respect for the rigid airship at Pearl Harbor is shown by their detachment of airplanes sent to attack the airfield and what remained of the mast at Ewa. It’s likely the Japanese assumed the Americans had the fortitude to reactivate that Class B rigid base. Indeed, many others assumed the huge investment made in the rigid airship – not to mention the many lives sacrificed in the pursuit of its perfection – would not be discarded by political whim. Instead, “Mr. Roosevelt’s Navy” entered WWII without a single aircraft capable of carrying cargo from the Pacific Coast to Hawaii, and an atrophied LTA industrial base.

Undaunted, a half-decade after the Durand Report, two outspoken young iconoclast US Navy Lieutenants (future Captains) – Richard Barkley and Frank Buckley –   sounded off against the flattop-carrier-only mentality in the USNI’s PROCEEDINGS, in an article entitled “Carrier Crisis.”  Further risking their Navy careers, they self-published “The Rigid Airship In Peace and War.” (right) Their radical recommendations, including a solid plan for a fifty fighter-plane-carrying, hydrogen-lifted fleet of 20 million cubic foot rigids, were likewise ignored. (Only a few copies of their book are thought to still exist.)

With the advent of computer-generated imaging, the rigid airship need no longer be limited to repeating grainy overused images to fill a time slot. Even some inexpensive TV shows have purchased wide screen Hi-Def computer graphics. However, unless the facts behind the re-creations are right, new projects would be little more than farce. So we need to re-examine the actual history. But least we get ahead of ourselves…

The average person never heard of the flying aircraft carriers. For most people, TV “educates” the rigid airship disappeared in an inferno of brightly burning fabric in 1937.  (In fact, a hydrogen-filled rigid flew spy missions up until just days before WWII began.) If you are ready to consider what might have happened in 1938-39 had LZ-129 refused the “flying moor” that fateful night, click on the > for a two-minute video speculation, which includes the only color motion pictures of a rigid known to exist. (Before hitting “play” check your sound is up.)

But we’re still way ahead of the story. What if the R-101 had just waited a half hour for the storm to pass through France?

Read on – to Empire of the Air

back to Home Page