We’ve not found photographic evidence of the literature’s claim all eight G-Z condensers were replaced with NASL Mark IVs by April 1933.  #6 unmodified is seen in her final images taken at Opa-Locka, March of 1933 (left), part of the Roy Gibbens collection shared with the producer. On March 29 an order for aluminium propellers was completed with Hamilton Standard.

In the “Macon post-mortem” report, a graphic-supplemented study speculated how the ZRS ships, once a Class A base’s supply of replenishment helium was assured, might violate pressure height if wartime conditions warranted.  It states that normally only about two and a half tons of water ballast was carried; dropping weight to gain altitude after that, of course, gave up gasoline.  Sacrificing the helium, it was noted that 60 to 80 feet of altitude could be gained per average fuel consumption hour, with the knowledge that the ship’s average speed was 50 knots against an average headwind of 6 knots. Therein, about 20 pounds of gasoline was consumed per ground knot. If the distance back to the helium-equipped base was 500 nautical miles, dumping the water recovered from fuel burned in those 30 hours (assuming 100% recovery) would allow helium venting to bring the ship up to about 4,800 feet without damage. In the example, with pressure height a common 1,200 feet, 30 hours into the mission about 70,000 pounds of fuel would be remaining. Since about 5 tons of fuel would be needed to get back to the base, a surplus of 60,000 pounds of fuel could be sacrificed. The would allow helium to be vented up to about 9,700 feet. In a dire emergency, “semi-permanent” equipment calculated to amount to almost 11 tons could be ripped out and tossed, and the ship could surpass 10,000 feet in altitude without cell rupture, by maintaining forward speed’s dynamic lift.  As her sister ship sadly demonstrated in 1935, these figures were pure theory for the USS Akron. In fact, such a sacrifice of helium was never willingly undertaken.

With a mission planned to begin on the evening of April 3rd, 1933, Akron’s X.O. Herb Wiley phoned the ship’s duty aerologist, LT Herb Wescoat, for an update. Wescoat told him the visibility over the Newport radio station might not be suitable on the 4th for the planned station calibration, but Lakehurst was expected to be acceptable for launch that evening. Skipper McCord and Wiley joined Wescoat at Lakehurst’s Aerology office after the 1000 weather report came in from the US Weather Bureau. LT Fred Dartch, then on station duty, interpreted the data as showers, but neither he nor Wescoat saw any threat in the data. McCord set 1800 hours for general assembly, with three F9C-2s and an N2Y-1 to be ready to hook-on after launch.

The chemically-damaged Tupper negative at right, printed from the Hepburn Walker, Jr. collection (now preserved by the LTAS), may be the last photo taken of USS Akron.

The two officers stopped into the station’s weather office again after the 1600 weather data chattered into the teletype. While interpretation of the isobars revealed no serious concerns to anyone present, just looking out the window at the lowering ceiling had McCord cancel the F9C-2 hook-on drill. 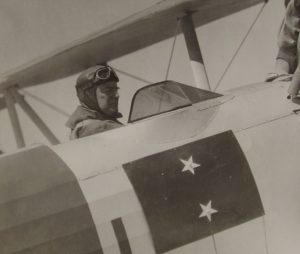 At 1928 hours 3 April 1933, Akron launched from Lakehurst. If the radio station calibration mission set up for the next morning had to be postponed for weather, there were various engineering tests to be performed. RADM Moffett (photo) was aboard, but sadly, a rather large number of men just needing to get their flight pay hours in that month also came along.  Moffett was likely planning on leaving the ship the following morning, via the N2Y-1 that pilot Trapnell was standing by. Fog was too thick for the hook-on planes to join the ship that night, as Akron’s bridge crew started seeing distant lightning flashes when they passed over Philadelphia about 2010 hours.

In this photo aboard the new Ak

ron Lt Tony Davis poses in the Aerographer’s room, with its speaking tube seen next to its pass-through from the radio room, directly aft on the port side. (Captain’s office was to his back, the next space forward.)  As lightning began to appear in many directions, Akron changed course and lowered altitude to lessen the chances of being struck. Wiley climbed the ladder from the car and walked up the centerline passageway to the Aerographer’s room to see what LT Wescoat had in the way of the 2000 hours weather report. Wescoat told Wiley about one-third of the broadcast had not come through; the partial number of symbols made it appear the storm’s center was above Washington, DC. As Richard K. Smith wrote, “The weather had taken a radical and unexpected change. Unknown to the men on board the Akron, they were flying ahead of one of the most violent storm fronts to sweep the north Atlantic states in ten years. It would soon envelop them.” The air became rougher and bursts of heavy rain became more frequent.

It may not have been possible to find and ride the storm’s “safe semi-circle” as was the usual practice. A brief sighting of lights on the coast showed the navigator, LCDR Howard MacLelland, the ship to be some 30 miles south of their expected position. He could not have known that apparently the data lost from the 8 pm weather broadcast included vital updates on wind direction and speed. The airship’s final track shows efforts to find the storm’s edge without running too far inland or out to sea and away from the general area the morning’s mission. Without question, Moffett’s expected morning departure strongly discouraged a run south to Paris Island, or inland to wait over Lake Erie, to stay within range of the N2Y-1. Shortly after watch change, the airship was caught in a downdraft nose-down, sinking to some 700 feet. They recovered by dropping ballast amidship, then forward, and the ship leveled out at 1600 feet. The air became even more violent, and she encountered another downward force.  Wiley rang up “landing stations” on the ship’s telephone howlers, the closest thing established as a general alarm signal. In the next few minutes some crewmen took their positions. LT George Callahan, who’d been on keel watch, climbed down to the bridge and took position at the ballast controls, behind and aft of the altitude pilot (elevator man).

Unlike the first plunge, Akron was now descending at a slight nose-up angle, possibly from wind shear (as Dr. R.K. Smith speculated in a letter to the producer). As Callahan read out “800 feet!” all hands felt the ship shudder with great force (later described as if one was running with a trailing rope, and then someone stepping on the rope). Though they did not realize it, the ship’s lower rudder and aft vertical fin was at that moment dragging in the water. The rudderman reported no response to the wheel and Wiley jumped aft to grab the flashlight off the navigator’s table. Reaching under the wheel, Wiley unclutched the lower rudder. About then the upper rudder carried away, so there was still no response to the wheel. Thus 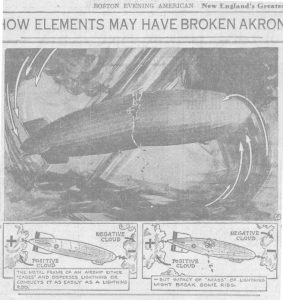 anchored and rudder gone, the engines stained to lift her, but the aft was held fast in the waves. The hull rose to an obscene angle; someone on the bridge called out “300 feet!” Wiley could see the ocean, calling out “Standby for crash!” The control car finally impacted the waves, and the ship broke apart. (Among the many wild speculations of the ship’s final moments was this clipping printed in Boston in the aftermath.)

Since Akron had not been scheduled for extended overwater operations, no life jackets were aboard. (A single life raft was later found, unoccupied.) While many likely survived the surface impact, most men who jumped into the freezing water were to drown, or die of hypothermia. 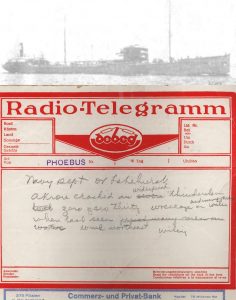 Lucky Herb Wiley was spotted hanging onto flotsam by a passing German steamer, the Phoebus, whose crew threw him a line and hauled him aboard. The Germans assumed they’d come upon a plane crash, with gasoline burning on the water with only small debris visible. When Wiley regained consciousness, he asked this telegram be radioed of Akron’s loss. A lucky three – RMC Robert Copeland, BM2 Richard Deal, and AM2 Moody Erwin were recovered by the German crew so brave to put boats in the turbulent water. Several others were seen but could not be reached in time; Copeland never recovered consciousness.  The Coast Guard Cutter Tucker arrived and took the survivors aboard, the Germans resuming their voyage south. As daylight broke Lakehurst rushed the old Army-style blimp J-3 out, in the hope of finding more survivors, only to have an engine strut fail. What should have been a routine beaching and ripping killed two more sailors when the rip panel instead broke, and the partially deflated wreck blew out to sea. (Click here for a complete list of those lost in the tragedy.)

With only three survivors  (l to r: Deal, Erwin, Wiley) various inquiries were unable to reach consensus as to how Akron met its end. When Germany’s Hugo Eckener heard of the accident, being unfamiliar with helium’s iron-bound altitude constrictions, he speculated Akron must have suffered an in-flight fire, which must have destroyed several gas cells. Never flying with helium, Eckener could imagine no reason why a safe altitude was not chosen to become a “leaf in the wind” when overwhelmed by storm.  Already restricted to a low pressure height on that soggy night, Akron’s barometric altimeter, impossible to update in the storm’s variable pressures, was most certainly inaccurate. As R. K. Smith wrote, “With the 785-foot-long Akron inclined 30 degrees and her lower fin’s tailing edge touching the ground, the control car would be 350 feet above the surface. And with the 0.25 inch [of water] error in the altimeter, the indicated altitude would be 600 feet.”

Owing to the small number of souls aboard the ordinary inexpensive airplane, in typical crashes of the day, on 9 MAY 33, a Latecoere 28 crashed near Villia Grande killing five, and on 15 JUL 33 a Lithuanian airplane crashed in Germany killing two. On 21 NOV 33 Russia’s K-7 transport crashed, killing seven. Though in total a great many more had been killed in accidents just leading up to the Great War, seventy-three killed in a single accident was utter devastation by the standard of the day. With so many personnel aboard, the death toll was unimaginable; indeed, it would be many years before a single aircraft accident would claim so many lives. More than twice the number of Americans were lost with Akron than those of the ZR-1 and ZR-2 – combined. A shock to the Nation already reeling from the escalating gang warfare caused by Prohibition, bank closures and rumors of betraying the Gold Standard, the loss of this great symbol of Naval Power with unprecedented loss of life could not have come at a worse time.

Anton Heinen once again made himself unpopular by telling the press it was bad policy to use helium on routine peacetime training missions.  Carl Vinson, Chairman of the House Committee on Naval Affairs, spoke for most of the senior leadership when he wrote, “We’ve built three and lost two; you can take it from me, there won’t be any more airships built.” In their view, fault laid not with the Navy’s asset management, the helium policy, or even the traditional blaming a Captain for a ship’s loss. Rigid airship technology itself was the problem(!) In their mind, precious resources were needed to buy ever more replacement, or newer and faster, airplanes; they both occupied the sky, right?  In their view, money would never again be squandered on a single contractor for such an expensive single, highly visible, politically vulnerable asset.

Hope for the Flying Carrier now depended on ZRS-5, set for her first flight in less than two weeks.

Read on to The Hook-On Aircraft

Read on to USS Macon Arrives

Read on to Ground Handling Evolution

Purchase the DVD The Flying Carriers