In this page, under construction, we see the rigid airship compared  – not to its non-identical twin, the submarine – but rather with what the ZRS was supposed to replace: the armored cruiser.  David Ingalls, Assistant Secretary of the Navy for Aeronautics and also a WWI ace, explains the preeminent thinking of the day. He mentions helium only in passing – without emphasis on its profound implications. Here we also see the evolving school of thought that the expensive airship should be an airborne base for airplanes.

Excerpts from a speech delivered by David S. Ingalls, Assistant Secretary of the Navy for Aeronautics, as reprinted in “U. S. Air Services,” September, 1930 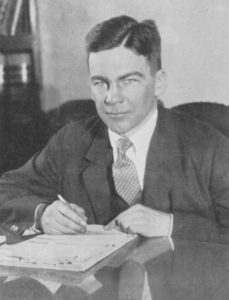 The interest of the Navy Department in these future airships is of course primarily military. It can consider the commercial aspect only secondarily. The military future of the rigid airship is assured. Most of you, of course, have heard much of the two gigantic ships that are being built for the Navy Department by the Goodyear company at Akron, but I wonder whether you have considered them from the naval warfare point of view. I wonder if you appreciate what a great aid they will be in future sea operations, particularly in the accomplishment of scouting and occasional independent missions far out at sea. Let us compare one of these ships with the modern cruiser.

On the other hand, the cruiser carries a greater armament, from 8-inch guns down, while the rigid airship carries only sixteen 50-calibre machine guns. And the cruising radius of the cruiser is probably twice that of the dirigible. These figures are based upon the first rigid airships built in this country and the cost not only of their manufacture but of their operation will assuredly be reduced appreciably as we gain in experience. During the World War, for instance, Germany was turning out rigid airships not quite comparable to these, of course, but great ships just the same, at the rate of one every six weeks, and at probably only one-fourth the cost. For practical proof of their military value, we may best go to Germany, for Count Zeppelin is the man responsible for the development of this type of ship, although there is an odd circumstance in the fact that he was a member of the Union Army in our Civil War. Germany believed and does believe in these ships, and at the conclusion of the World War had constructed 115 of them. Their value from a military point of view was appreciable not only for scouting but also for transportation of certain articles, and bombing of enemy bases.

On two occasions the Germans operated a number of these ships in co-operation with the fleet, including at the Battle of Jutland, and benefited through their scouting. The British coastal defense against these great ships required vast expenditures of moneys and a tying up for a defense against anticipated bombing raids not only of shore-based anti-aircraft but also of squadrons of defense fighting planes. At the conclusion of the War, Germany was producing one of these ships every six weeks – as fast as she could produce them. Although the great development of the rigid airship was in Germany, both the British and our own country did a good deal in the construction and use of non-rigids for convoying and patrolling. As far as can be learned, no convoy of ships, when escorted by lighter-than-air ships, was ever successfully attacked by submarines. Thousands of miles of coastal waters during the War were covered by these small blimps.

We can find many expressions approving the worth of lighter-than-air in many quarters. The Germans, of course, relied upon them enormously. But also we find the English, through Admiral Beatty, expressing the opinion that one of these great dirigibles is the equal of six cruisers, and we find Admiral Jellicoe apparently in accord with him and pointing out his sponsorship of this type ship from a time long before the World War. The two great dirigibles being built for the Navy Department will accomplish two purposes. The principal one, of course, is that of scouting over the vast expanses of the oceans. Those acquainted with operations at sea will appreciate that any sort of extended cruise at sea requires great reliability and a long cruising range. The airplane with only one or two engines and a few hours of fuel is obviously greatly restricted and limited in its operation and must restrain itself within reasonable distance of surface vessels to  afford a base. The rigid airships may cruise for days and days and for thousands of miles affording, through radio communication, information of inestimable value to our Fleet. Probably the greatest essential in naval warfare is a means of scouting, and the rigid airship affords this in an incomparable manner. Granted reasonably good visibility it can scout over twenty times the surface of the sea that can be covered by the ordinary cruiser.

The other purpose of these ships is to afford a super-carrier for airplanes. Each rigid airship is capable of carrying within its hold five or six airplanes and of launching them and taking them on board again during flight. These planes are the striking force of the rigid airship and may be used to bomb and machine-gun enemy planes, bases and ships. In a way the rigid airship corrects the most fundamental drawback of the airplane  – that is, its short cruising range. It affords a means of bringing airplanes within easy reach of their objective rapidly and without fear of detection. In this regard, then, .the rigid. airship is comparable to our surface airplane carriers. It is of course limited to far fewer planes, but on the other hand affords far greater mobility.

These rigid airships are not frail creatures, the victim of  any inclement weather or enemy activity. Not a single one of the 115 rigids built by the Germans came to grief because of structural failure. And these ships were admittedly not nearly as strong as those of the present day. Furthermore, they were lifted by hydrogen, an inflammable gas. In addition, they were operated over land and within anti-aircraft range. The Navy Department will use these ships at sea, and as there is no reason or justification in approaching closely enemy ships, they will practically never be within range of anti-aircraft guns. This fact will limit the attack to that of enemy aircraft.

The Navy airships will contain helium gas, which will neither explode nor burn. This helium is contained in many separate cells and the ship will continue to operate even though one third of these cells are totally destroyed. The Germans actually returned to port in more than one instance with over one-third of their gas cells totally destroyed or emptied of gas. As helium escapes very slowly in any event, and practically not at all from holes in the lower third of the cell, the loss of gas occasioned by hundreds of bullet holes would be immaterial for many hours. With eight separate engines, anyone of which would enable the ship to at least cruise at a slow rate of speed, it is unlikely that there would be a loss of all motive power.

These ships are able to rise at the rate of 2,000 feet a minute by dropping ballast while they are traveling forward over 80 miles an hour. The faster pursuit plane is unable to climb at a like rate of speed, and in order to climb at all, loses a very great deal of its forward speed. As the crew of the rigid airship would undoubtedly see the ship from which any attacking airplanes would have to be launched at least as soon as the crew of the ship saw the rigid airship, an airplane attack may be considered negligible, for a surface vessel would probably be unable to head into the wind, prepare pilot and plane for flight and launch the same before the Zeppelin would be out of sight. And in any event, the plane could pursue for only one-half its cruising range, when it must return to its mother ship or be lost at sea. Should an airplane attack be impending, the rigid airship may first launch its five or six fighting~ planes as a means of defense and further may use the 16 machine guns strategically located at various points of the great ship.

In view of all this, the modern dirigible is practically invulnerable when operated at sea. It affords the Navy Department an incomparable means of scouting for its Fleets and an unusually mobile airplane carrier.

Funding for flight under hydrogen had been cut six years earlier, which meant using helium – and designing larger ships to at least partially address its crippling loss of performance.  R. K. Smith concluded, “As a lifting gas, the only thing which made helium attractive was hydrogen’s flammability.” Helium’s resistance to mixing with oxygen, which keeps it from becoming a fuel, seems to make it an absolute necessity. However, the long-established, tried and true method of preventing the lifting gas from becoming fuel had been to simply keep oxygen out of the gas cells. Since the first days of LTA that was already being done without additional weight or cost.  Purity  insures maximum lift with the side benefit of no possibility of accidental ignition. As the nation’s airshipmen came to grips with helium’s limitations, they found in practice they had to do the very same thing for acceptable lift. It was every bit as important to keep oxygen out of the helium envelope – if not more so, to prevent loss of helium’s lesser lift.

The lack of fire in the ZR-1 accident has often been touted as a triumph of using the inert lifting gas. The accident might also be seen as the false economy of placing extrapolated fire safety over proven operational safety. Even in the uproar that followed Army General “Billy” Mitchell’s insubordinate (and some say brazenly political) struggle, at least one man stood up to imply the lost airship and fourteen dead men were actually victims of the Government’s helium policy. Anton Heinen, a German Zeppelin Captain who came over with the LZ-126, had been a flight instructor, and was  largely responsible for saving the ZR-1 in the mast breakaway incident.  Heinen made himself unpopular by pointing out the ZR-1’s structure had broken right where valves had been covered shut. He was quoted as saying “Those valves were put there for a purpose!” Not aware safety valves had been purposely capped to stop helium leakage, authors Geiling and Sauter would write, “Absence of high-pressure relief valves is said to have been the cause.” However, at the time, the wisdom of the necessities of helium operations was not supposed to be questioned publicly. Heinen told the New York Times, “I could have taken the Los Angeles filled with hydrogen on that same morning and followed in the wake of the Shenandoah and brought her through without the slightest danger… [Shenandoah’s] alterations were designed as a measure of economy to save helium. It was poor economy for it wasted the most precious material aboard – 14 human lives.”

Sadly, those men’s lives would not be the last wasted to learn the bitter lessons. There are many ways to lose an airship that do not involve fire – and helium operations added deadly complications never known before.

Read on to ZRS-4 Evolves

Back to the “Dark Curse”