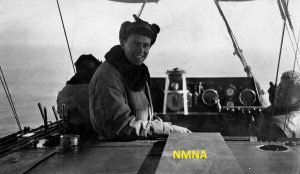 Noting American motor-balloons as early as 1904, the U.S. Army contracted its first airship in 1908 and the Navy ordered its first airship in 1915. Neither effort was repeatable, so America entered the Great War without airships of its own. Shipped to Europe in 1917, American officers and men trained to operate French airships and British “blimps” against German U-boats. Flying the single-engine British “Submarine Scout Z,” as well as the French Astra-Torres AT-ships, Zodiac “ZD” and Chalais-Meudon “T-2,” sailors learned the art of overwater flying in most any weather. British deployment bases were literally hewn out of coastal forests with airships routinely deflated and re-filled with hydrogen in the field. Eventually given European bases with hangars, Americans flying ASW airships successfully escorted convoys and located crashed airplanes. Many submarine attacks were logged; one crew was credited with sinking a U-boat.

An advanced French anti-submarine airship flown by Americans in the Great War was the Chalais-Meudon T-2. Twin air-cooled radial engines propelled the heavily armed torpedo-shaped car under the hydrogen-filled envelope of some 335,000 cubic foot volume.

No American airships flew in Europe, but several British, French and Italian airships were purchased and brought back to America. These airships are detailed in James Shock’s US Navy Airships.

Inspired by British airship’s successes with their quickly assembled “SS” types, production of effective pressure airships began in America. Following the hapless “Dirigible, Non-Rigid -1,” the first “scout dirigible,” designated model “B,” consisted of a lengthened Curtiss aeroplane fuselage suspended under hydrogen-filled envelopes made by Goodrich, Goodyear, and Connecticut Aircraft. Since there was no suitable hangar in the country, the first ships were erected in a Chicago shed home to early “rubber cow” showmen and airship ride operators. 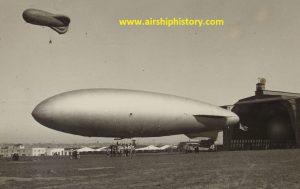 American “B” type with the standard steel hangar erected at both ends of Long Island, in San Diego, Massachusetts, Panama Canal, Virginia, New Jersey, and two in Florida. Complete hangar specifications and photos are part of James Shock’s American Airship Bases and Facilities.

Goodyear Tire & Rubber Company erected its own hangar near Akron, Ohio, and was contracted to train the first class of Navy airshipmen. A series of airship bases, each equipped with a standard steel hangar and hydrogen generator, were constructed at strategic locations on the American coasts.  As B-ships were delivered late in 1917 and early 1918, their patrols established duration records for safe operations envied by early seaplanes. Two B-ships and crews were thought lost in separate submarine hunts. Stranded but adrift on the water, both were towed home by passing merchantmen. Experiments showed that the small airship could launch a torpedo as B-15 dropped one and valved off a matching amount of hydrogen lift.  A “stretch” variation was introduced, allowing another crewman and more fuel to be carried. During thirteen thousand, six hundred hours of coast patrol covering four hundred thousand square miles, there were no major accidents or fatalities. Only one of the eighteen B-types could claim sighting any of the five German U-boats that attacked shipping along the American seaboard.

The success of larger European airships lead the Navy to order its first twin-engine airship, the “C” type, which established new records on its first flights.

The twin-engine C-type’s envelope held 181,000 cubic feet of hydrogen for useful lift of 4000 pounds. Motion pictures of B, C, and D-type airships are included in the DVD “The Early Days.”

More European design details were copied in the “D” types, ordered next, but the Armistice came before any more could be delivered. Though the war was over, the new twin-engine C-type airships began joining the fleet. Following British experiments that were not successful, in December 1918 the C-1 was used to loft an Army JN – 4 airplane, launching it in flight. In January 1919 C-1 flew from New York to participate in torpedo exercises off the Dry Tortugas. In February the C-3 demonstrated aerial refueling from surface ships in the vicinity of Cape May. Most famous of the C-types was C-5, which was flown from New York to Newfoundland intending to beat the NC-flying boats to be first across the Atlantic. The lack of mooring equipment there, high winds and a broken ripcord resulted in the ship escaping its crew.

The J-types were the longest -serving Great War era airships, enclosing 210,600 cubic feet of gas, the only WWI-era designs practical with helium.

In the 1920s, Goodyear sold the Government three one-of-a-kind single engine airships – the E-, F- and H-, which were operated briefly in experimental, utility and training roles. The ultimate evolution incorporating most previous WWI-era designs was the twin-engine J-type airship. The specifications and individual records of these airships are detailed in James Shock’s US Navy Airships.

Postwar endurance flights and promising developments in ASW, as well as rescue techniques, were overshadowed by emphasis on duplicating the German Zeppelins’ success in scouting for the Fleet. When Congress cut funding for hydrogen-borne flight, this forced the use of expensive but fireproof Texas helium lift. Only the J-type pressure airships were retained, serving in one form or another, from 1922 until J-4 was retired in 1940. In its long service J-4 tried seawater ballast pickup, stretcher patient rescue recovery, sky-blue camouflage envelope paint, and a ballasted ladder for crew transfer from a surface craft.

ASW languished in the Depression-interwar years as the many LTA achievements were forgotten. The Navy struggled to obtain one pressure airship per year. Worked around Congressional funding limitations, the K-1 was a unique creation of the Naval Aircraft Factory, mated to a modified J-type envelope. K-1 was the only Navy non-rigid to demonstrate equilibrium- preserving gaseous fuel. The Navy purchased an off-the-shelf Goodyear blimp in 1935 (designated G-1) and again in 1937 (designated L-1), then re-erected the two most recent US Army airships when that funding had been cut. Finally ordering an “improved K-1,” the so called K-2 was delivered in the final weeks of 1938.

Between the Army TC-13 and -14, G-1, L-1, K-1 and K-2 there were few compatible parts in the entire USN LTA inventory.  The lessons of the Great War would have to be re-learned when U-boats came back to the Americas and few airships were available to oppose them. The DVD “The Blimp Goes To War…Again” begins with this interwar period with the only known motion pictures from those years.

Read on to Helium Edict: The “Dark Curse”

Read on to The USN and the Rigid Airship