Since the F9C-2 was not created for, but rather adapted to the role, the hook-on pilots longed for an airship-optimized design that would harness the the airship carrier & planes’ unique capabilities. BuAer was working on just the thing, rolling out Design #124 only a few months after Akron went down. #124 reflected not only

improved materials and techniques for its day, the trend moving away from bi-planes of wood framework toward stress-skinned monoplanes. #124 was even more radical, with a more difficult-to- manufacture elliptical wing.

Instead of just adapting an existing fighter, Bureau of Aeronautics Design No. 124  (above) was a flying-carrier airplane, period. If we could build specialized airplanes designed to work aboard flat-top ships, why not an airship-carrier optimized design? As we have shown, several officers realized in 1933 (not ‘35 has had been suggested) the airship’s planes should do the scouting, never allowing the high-value airship itself to make eyeball to eyeball contact with the vanguard of the enemy fleet. So building on the ZRS program experience to date, BuAer LTA genius C.P. Burgess rolled out his nine Mil cuft ZRCV design which easily carried nine of the #124 designs.

Press > for a short video about how the hook-on planes would have evolved, or continue reading for more details.

Sadly, it was unlikely the Naval Aircraft Factory could re-tool for another ZR-1 – like effort even for assembly in what would have to become an orange-peel door-equipped Lakehurst hangar. With no airship carrier, there seemed little need for what would have actually been a modernized Sparrowhawk in capability. One man in a tiny cockpit would still be challenged to muti-task as scout, navigator, Morse code interpreter and tapper, and of course, fighter pilot. As the ZRCV awaited a champion who could get it through the Washington funding maze, theory had already began to evolve away from a single-seat fighter-scout airplane. Adding a second man at first had seemed non-affordably luxurious, but then became increasingly more practical.  As new radio, navigation and homing equipment began to overload the pilot trying to fly the airplane and also look for the enemy above and below, a two-man crew became more of a necessity.

Goodyear was quietly working on its next generation rigid airship. It was a carrier from the keel up, initially illustrated with the familiar F9C-2s of old. Applying lessons learned and the latest thinking in the hook-ons (above), their design soon accommodated “Northrup-Type Attack Bombers” within a extended keel.

Possibly without knowledge of Goodyear’s plan, but reflecting the need for two men in the cockpit, BuAer’s  ZRCV concept was quickly refitted from the one- seat #124 to the Northrup BT-1. With 54 production BT-1s ordered in the fall of 1936, a ZRCV version would need little more than the tailhook removed and a skyhook added.  With BT-1, and other larger designs like those big enough to carry a standard torpedo coming along,  there was an obvious need for larger, more expensive flat-top ships. However, the BT-1’s lack of folding wings was no problem for the airship version, since ZRCV did not attempt to enclose any more than the airplane’s upper fuselage.

Of course the high-value dirigible would still need fighter protection, never forgetting the senior leadership initially opposing the Sparrowhawks’ getting too far away from their valuable mothership.  The Burgess ZRCV design did not display an option for fighters to be carried along with a full attack bomber complement, though it obviously could have carried a mix if necessary for mission demands. However, Goodyear’s reinforced extended keel also included stowage of “Vought-type pursuit” planes.

The Vought V-143 was obviously the inspiration for the Goodyear vision, the Army’s existing lightweight design a better idea than expecting both airship and purpose-built airplane to be scratch-built for each other at the height of the Great Depression.  Goodyear’s vision was to carry both fighters for protection and scout bombers for strike capability. The airship could not only sweep vast areas to find the enemy, but then engage him, as well as be ready for any counter-strike aimed at following the bombers back to their mobile base. Though not published in detail, it’s likely BuAer’s ZRCV evolved into similar thinking. 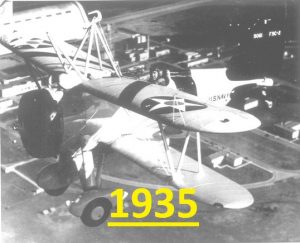 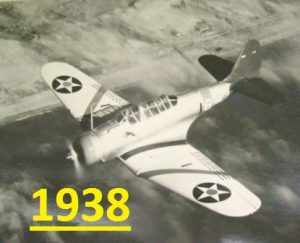 For the moment, let us understand how the strike capability  (and would have) evolved. Building on the notorious problems with the BT-1, Northrup engineers were funded to develop the more powerful XBT-2. Behind the scenes at that company, Donald Douglas, who’d actually helped design at least parts of an early Navy pressure airship, had a falling out with Jack Northrup. Northrup left Douglas Aircraft- leaving the XBT-2 design behind. Meanwhile the Navy decided straight “bombers” would be multi-engine, so the designation Scout Bomber was created. After extensive wind tunnel of the full-scale prototype and a host of wing and tail configurations tried by lead engineer Ed Heinemann, the now Douglas airplane emerged as the XSBD-1. Fifty seven -1’s were built before range deficiency was addressed with the addition of two 65-gallon wing tanks, extending the now SBD-2 range to 1200 nautical miles.

The evolution of BT-1 into SBD-1 happened so quickly it is very likely that by the time the ZRCV took to the skies, the SBD would have been the scout bomber of choice for the airship, verifying author Rowan Partridge’s vision.  It’s a good choice, based on its record: first enemy ship sunk after Pearl Harbor, hero of Midway, etc.  And, as it turned out the SBD was one of the very few airplanes whose small evolutionary steps were so close to being retro-fittable (from the -1 through the -5) that it takes a real fanatic to tell one from another. Of course Douglas could have easily offered our envisioned SBD-Z1,   with the sky hook replacing the hoisting bridle carried in the cockpit. The simpler pit-pin landing gear and deleted arresting gear reinforcement would have made it a real performer of its day. 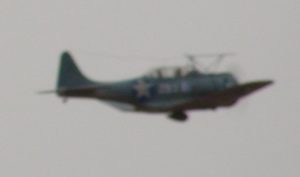 Another logical development would be the oversize drop tank seen in our flying model SBD-Z1, out-ranging anything in its class.  As our flight tests verified, adding the skyhook made no discernible difference in its airborne character. 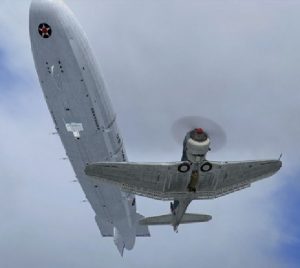 The 41-foot wingspan SBD-Z1 could not be taken inside the Akron or Macon, but if they had survived those older, smaller airships could have had their trapeze and perch equipment beefed up to conduct SBD pilot hook-on training.

Meanwhile, Rosendahl wrote, “Aeronautical engineers and many of the public know how stepping up the airplane’s top speed requires increased stalling or landing speed. Competent engineers have assured me that specifically designed airship-borne airplanes, privileged to have a landing speed of some 85 miles an hour in attaching to the airship, could be endowed with a maximum speed of well over 400 miles per hour, thereby taking unto themselves the glory and advantages of being by far the fastest airplanes operated out on the high seas.”  In our view, the ZRCV would not have been operated without some option of defensive fighter aircraft. An escort of highly maneuverable fighters on shorter range strike missions would have been a good option for the airship’s own defensive screen in situations where there was no long-range threat to the airship itself. It is therefore a question of what fighter airplane would have been carried aboard in 1939-1940. 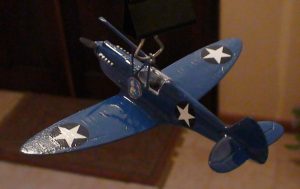 For the movie, we have leaned toward the Navy developing its own fighter design, Bu Aer #124. This is backed up by the Naval Aircraft Factory’s unique ability to manufacture short production runs that might not be profitably attractive to an airplane maker who did not develop a design in-house. All the skills involved in woodworking could be dusted off at NAF, not having to be re-learned, as new adhesion and preservation technologies were applied. 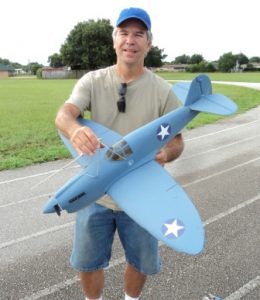 So, how to build a real #124 for the movie?  With a strong profile resemblance to  the P-40 and a wing design similar to the Spitfire,  the obvious solution was to combine the two in model form. With modern CGI such a close formation of parts could be given high performance on the screen. But would it fly right? In fact, would it fly at all?  Space shuttle technician and airplane builder Mark Shimei joined our team to create the #124 to find out.  #124 actually flies pretty well, thank you!

Since the producer and many friends are EAA members and aviation enthusiasts, we are determined that an actual airplanes will play the roles of the novel’s hook-on defensive fighter and bomber planes. The SBD can be rented by working with one or both of the investor / volunteer teams that maintain two flying SBDs today, one in California and one in Georgia. Of 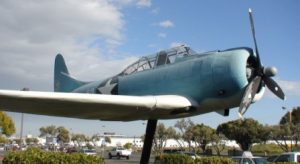 course we’ll have to build a non-flying replica as well for manipulation in the hangar bay set. That construction should be no problem; several SBDs are on museum display and at least one convincing replica has been constructed. It sits on a pole outside the Proud Bird restaurant near Los Angeles airport (photo).

Since no airship fighter ever existed, there is only one way to be sure a non-flying mock-up and CGI stand-in is not quickly substituted for this expensive, tricky and long-lead-time essential. We must have a real airplane available when the cameras start rolling. Quite a bit of time was spent mulling over how not to kill ourselves (literally) cobbling together an HTA – for – LTA machine that could fly.

Read on to “P-77,” our Silence Twister kitplane

Read on to US Navy and the Hindenburg

Back to Macon “post-mortem”