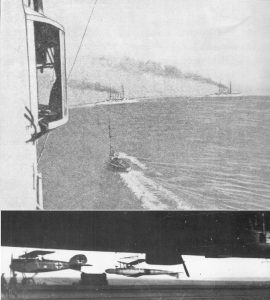 US Navy sailors could only lust after the Zeppelins’ long range fleet scouting (right), credited with saving the German Fleet at Jutland. Dr. R. K. Smith wrote, “The Germans first exploited their Zeppelins as a reconnaissance vehicle… and there were experiments to carry airplanes as a ‘built-in’ fighter escort, and an effort to develop a remote-controlled glider bomb which would provide a limited standoff capability.” (lower right, both on LZ-80, while other ships carried a “spy basket”).  America was the last major power to initiate work on a large airship, but early efforts were quickly discarded when an exhausted Zeppelin literally fell into Allied hands. Brig. Gen. William “Billy” Mitchell wrote, “Several pilots from French squadrons in the vicinity had attacked the great ship on its way down and fired innumerable bullets into its envelope, many of them incendiary, but with little effect.” One sources says the Zep crews then hastily fired flares into the airless hydrogen cells, which snuffed their combustion,  allowing French troops to capture the L-49 (below) intact and still partially buoyant.

French constructors reverse-engineered plans of that height-climber Zep (factory number LZ-96).  By 1919 Americans were adapting the plans and strengthening its lightweight structure. By 1922, the Americans had begun construction of their copy, designated ZR-1, via pieces riveted at the Naval Aircraft Factory.

Following the loss of the R.38/ZR-2, the Allies allowed the US Navy to purchase a real Zeppelin. Signing a contract in June, 1922, construction began on build number LZ-126. Meanwhile, following an admittedly fraudulent “demonstration” that tricked Congress into cutting funding for hydrogen-borne powered airship flight, inflation of the new ZR-1, USS Shenandoah, awaited 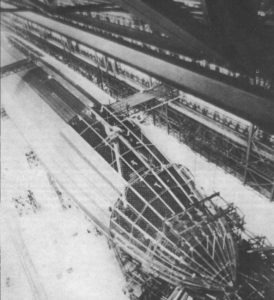 shipment of enough Bureau of Mines helium bottles. Dr. Richard K. Smith offered a sobering view of the realities of the change-over, “…it was the Shenandoah which taught the Navy and indirectly the world, that however “safe” helium was by virtue of its nonflammability, it was no panacea.  Indeed, helium created its own peculiar problems to afflict airship operations.” Peter Andrews would detail, “She had been designed for hydrogen, and although helium produced 92 percent of the lifting power of hydrogen, its use reduced the Shenandoah’s range by almost 40 percent, which effectively robbed the ship of its long-range reconnaissance capability.”

ZR-1 finally launched in September, 1923. (Surviving motion pictures are included on the DVD The American Zeppelins.) Her early operations – including a daring flight to the St. Louis Air Races in October – repeatedly found the ship delayed waiting for the helium to cool down – superheat was now a larger problem. Lifting gas naturally had to be vented for landing. Author R. K. Smith explained, “As an airship burns off fuel it becomes lighter and wants to climb higher. Ordinarily, [lifting] gas would be valved to correct the situation. But the Americans were obliged to devise a system to generate ballast to replace the weight of the fuel. The Navy developed 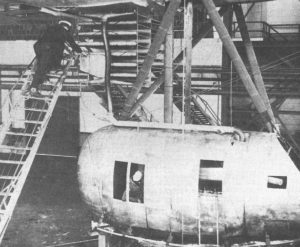 a means of condensing water vapor from the exhaust gases of the airship’s engines, which more than replaced the weight of the fuel consumed. However, the weight of this water recovery apparatus was substantial, its aerodynamic drag was phenomenal, and its maintenance was a constant headache.” (Photo: final version of the water-recovery condenser stack on ZR-1 engine car #2.) British author Teed had only seen such equipment in use in the ZR-1 at the time he wrote “…this means a double reduction in the efficiency of an airship.”

Meanwhile, Zeppelin constructors drug their feet on what was assumed to be their last job, finally delivering LZ-126 to Lakehurst in October, 1924.

Propped up from the floor and hung from the hangar rafters, ZR-3’s hydrogen was vented through the roof. With only enough helium for one rigid, both ships were suspended from the hangar and propped on lumber to transfer ZR-1’s gas to ZR-3, which was then flown to Washington and christened USS Los Angeles.

Suddenly the airship that had crossed the Atlantic could not go back, even with the favorable wind. Airship guru Charles P. Burgess explained the harsh realities of the problem in his 1927 book AIRSHIP DESIGN. “It is common practice in America to take the unit lifts of hydrogen and helium as .068 and .060 lb/ft3 in the standard atmosphere at sea level. Both units are conservative. From these figures, 11.8% of the gross lift is lost by the lift of helium instead of hydrogen; but the percentage of losses of the useful and military or commercial load are much greater because the weight of the ship empty is a fixed quantity, and the absolute losses of gross and useful lifts are therefore equal.” In the example given, a mathematical formula proves that the airship’s useful load is decreased by 31%, and the loss of commercial load is an astonishing 59%!

Those figures came before the weight of the now-necessary water recovery apparatus was figured in. Robinson and Keller wrote of it, “While the theory was simple, the practice was not, and some of the problems were never solved.” Naturally the engines lost efficiency due to back pressure, and the radiators had to be bypassed for full power – just when fuel weight was disappearing at the greatest rate. The power-robbing hardware hanging out in the slipstream increased aerodynamic drag. Units added to ZR-3 were found to increase drag anywhere from 5% to an astonishing 10%. Since the units once froze and became useless, extra tonnage of anti-freeze had to be carried, and as Robinson and Keller reported, “…extensive corrosion of the keel girders caused by the use of calcium chloride antifreeze in the ballast bags… Subsequently, alcohol was the preferred anti-freeze despite the greater expense.”

Following a few month’s flights of the “German jewel”, the process was repeated and ZR-1 reclaimed the helium and its original condensers. There had been serious planning to borrow helium from the Army and marshal other resources for a flight to the North Pole, but comparatively little actual scouting in Fleet exercises.  By the late summer of 1925 ZR-1 was seeping helium so badly it would have soon exceed available replenishment. In desperation, “jam-pot” covers were used to cap the worst seepers, that were at least reachable, the leaky overpressure safety valves.

Zeppelin Captain-instructor Anton Heinen, hero of the breakaway flight, as Stan Washburn explained, “bluntly announced that  such a move was insane and likened securing the gas valves on the Shenandoah to tying down the safety valves on a steam boiler. He then advised the Navy Department he would not fly aboard the Shenandoah with the emergency valves tightly secured.”

Shipping out anyway, not to a Fleet exercise, but instead a public visibility flight in September, ZR-1 encountered a most violent Ohio storm in which “…the ship was pushed above its pressure height in the up-draft… ”  The helium cells expanded normally as in any ascent, but the safety valves had been closed off. Unable to vent,  “internal pressure broke the structure into three sections which crashed down separately…”  Men in the car, at the break junction and in the engine

cars, were lost. Many men were saved by hanging on to other individually buoyant pieces until they settled. Unlike R.38 / ZR-2, whose break exposed gasoline spraying from the broken fuel line at the point severed and sparking electrical cables were still connected to a running generator, there was thankfully no fire.

In the aftermath, “… a Navy spokesman said the disaster was an act of God.”  Anton Heinen refused to parrot the helium propaganda. Interviewed, “… he brought out the directive from Washington ordering that the valves be sealed to prevent leakage of expensive helium and his written refusal to comply.”  Pointing out the structure failed right where the valves had been capped,  he emphasized publicly, “Those valves were put there for a purpose!”   However, at the time, the wisdom of the necessities of helium operations was not supposed to be questioned publicly.  Heinen told the New York Times, “I could have taken the Los Angeles filled with hydrogen on that same morning and followed in the wake of the Shenandoah and brought her through without the slightest danger… [Shenandoah’s] alterations were designed as a measure of economy to save helium. It was poor economy for it wasted the most precious material aboard – 14 human lives.”  A loose cannon on the deck, as a “…result – Heinen was fired.”

It was not public knowledge the British had purposely overpressurized the cells of R 32 during its being dismantled, which verified the rigid’s structure would be compromised without functional cell safety valves. Though never admitted aloud or in print, destructive testing of ZR-3 just prior to WWII also verified Heinen’s assessment. No apology to the ZR-1 victim’s families has ever been made.

While it is not a substitute for a complete history, we have created a half-hour video covering the ZR-1 history. 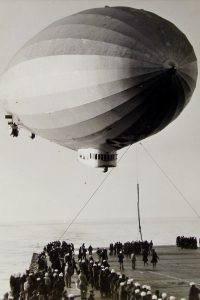 Waiting almost a year for enough helium to be accumulated, ZR-3 resumed flights in April, 1926.  In spite of meager helium allotments and aging, leaky cells, no safety valves were ever again capped off.  Several flights were made for calibrating radio stations as well as fostering interest in rigid airships. On 27 January 1928, ZR-3 “landed” aboard the aircraft carrier USS Saratoga for practice refueling and crew exchange (right; motion pictures are in the DVD The American Zeppelins). She was used in the development of the stub mooring and mobile mooring masts. ZR-3’s overhauled but still leaky cells challenged a regular flight schedule as the original Petrolia natural gas filed ran dry of helium. Congress authorized sums to develop the only other rich field, hundreds of miles away, centered around Amarillo, Texas.   Rosendahl summarized, “…LOS ANGELES… contributed very extensively to general airship progress during her intermittently active 15-year existence.” 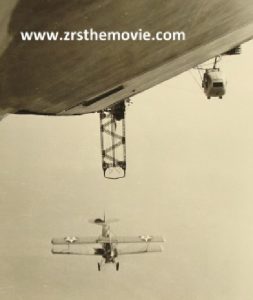 After the original German, and later British, and even US Army blimps’ airplane carrying experiments, a “trapeze” was installed aside the ZR-3’s keel in December 1928. ZR-3 began experimenting with launching and retrieving airplanes while in flight. A hook-on and release were demonstrated at the National Air Races held in Cleveland, Ohio, in September, 1929. Three N2Y-1 trainers and the XF9C-1 rejected fighter airplane were given “skyhooks” and tested, but a plan to add more airplane handling equipment along the ZR-3 keel was shelved for economy reasons.  Likewise the airship herself was decommissioned 30 JUN 32, operating two helium rigids at the same time was out of the question.

Click on the paly icon > for a one-minute clip from our DVD “The American Zeppelins.” (Sound on. Karl Kalbaugh, narrator.)

Ever since ZR-1’s control and engine cars fell loose, the Navy’s Bureau of Aeronautics had envisioned interior fireproofed engine rooms and an hull-integrated command car. Since Bu Aer Design #60 evolved steadily through the later 1920s, it is difficult to pinpoint precisely when seaplane-carrying capability was added to the wish list. It is clear, however, the earliest designs were modified to add airplanes, rather than being originally laid out as a mobile aircraft base.

Read on to ZRS-4 Evolves

Back to Empire of the Air 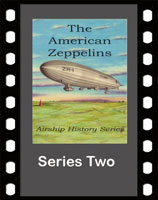